Step aside, Sherlock: there’s another big brain on the scene.  He’s got deep knowledge, pieces together abstract concepts on the fly, and shares a name with your erstwhile partner.  Meet Watson. 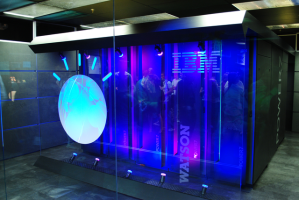 If you watched Jeopardy last February, you got to witness the unusual intersection of cutting-edge intelligence research and popular game shows.  In a handful of matches, Watson the computer defeated two human champions, including Ken Jennings, the winningest player ever.

What’s amazing about this is not so much Watson’s depth of knowledge – he’d been loaded up with the entire contents of Wikipedia, among other things – but his ability to respond to highly abstract natural language.  Instead of just sifting for keywords, Watson’s algorithms deduce what your question means and then offer up an answer that fits.  (Here are some illustrative videos, if you want to know more). To illuminate just how awesome this is, here are 5 careers that I think Watson could compete for in the near future.

1. Game Show Contestant.  Okay, I don’t know if this really counts as a career, but Ken Jennings made a killing at it, and Watson beat him handily.  Assuming Alex Trebek would let Watson anywhere near that stage again.  If not, I guess there’s always Wheel of Fortune.

2. Medical Advisor.  This is already in the works.  Watson can provide rapid advice, cross-checking a patient’s medical history with a massive database of symptoms, journal articles and other knowledge to produce highly accurate opinions.  You might soon meet him at a clinic near you (although his first job is actually with an insurer, which worries me a bit).

3. Technical Support.  Most humans don’t want the job of dealing with frustrated, ill-informed customers all day.  And no customer enjoys dealing with a frustrated, underpaid service rep.  But Watson never gets tired of answering the same question over and over, and moreover, doesn’t care how outrageous or mundane your problem is, he just offers solutions.

4. Patent Lawyer.  Many jobs in the law sector involve massive amounts of research, looking up statutes, relevant precedents and so on.  Watson, given the right vocabulary and access to the right data, would be a pro at sorting out useful information and providing opinions.

5. Interpreter.  The problem with current automated text translators is that they go more or less word-by-word, which as any 7th-grade language student can tell you, results in frequently meaningless and occasionally hilarious interpretations.  But Watson, who can grasp holistic concepts, could be the ultimate in real-time, robot-powered language translation.

Conclusion: In the midst of a recession, I admit that robots taking our jobs is possibly the last thing we want.  But as with the many manual labor jobs now dominated by automatons, I believe that in the long run, we’ll simply be more free to focus on other, uniquely human endeavors.  As Ken Jennings himself said,

[It wasn’t me] playing for the human race. That was Watson’s role, as a symbol and product of human innovation and ingenuity.  So my defeat at the hands of a machine has a happy ending, after all.