It may look like pond scum to you, but one day, the plant-like organism known as algae could rule the world.  How can such an immobile, simple-bodied eukaryote pull this off?

For one, many of these little guys are photosynthetic.  “Big deal,” you say.  “Every plant on earth can claim the same thing, from the grass in the front yard to the tree across the street.”  That’s true.  But it actually is a big deal.  Consider what happens when photosynthesis takes place:

Now consider this expression in the context of the world today.  On the input side, Co2, or carbon dioxide, is a major problem, since an excess of it is the main driver of global climate change.  On the “output” side of the expression is fuel, meaning stored energy.  Of course, our civilization has a voracious appetite for energy, which in one way or another powers everything about our lives.  So abstractly speaking, any process that takes in Co2 and puts out fuel is solving multiple problems at the same time.  (In fact, those problems result from the reverse process: we burn fuels to get the energy out, and end up releasing excess carbon). 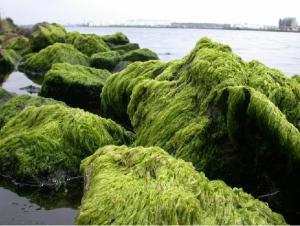 If photosynthesis is so great, then why bother with algae, instead of, say, trees? It’s a matter of efficiency.  For example, you can certainly get energy from a tree, once you cut it down and burn it.  But the efficiency is horribly low, especially when you account for how long it takes to grow a tree, and the amount of water it sucks up in the meantime.  Alternatively, corn can be grown for conversion to ethanol, which can then be used as a fuel.  But that uses up lots of valuable agricultural land that could be used for growing food.  Some scientists are experimenting with switchgrass and other sources of biofuel, with mixed results.

That’s where algae enters the picture.  Algae can be grown vertically, reducing space needs; it does not require fresh water or agricultural land; and it is very efficient at producing fuel, because pretty much the entire organism can engage in photosynthesis. 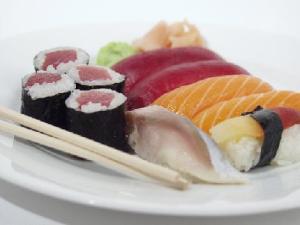 A World Run On Algae

In a world where algae is used to its fullest potential…

Not too shabby for pond scum, eh?  To be sure, there are some technical hurdles I’ve glossed over.  But the main obstacles appear to be economic in nature: it’s hard to achieve an economy of scale when the energy market is already dominated by oil.

But that’s nothing a little vision and serious investment can’t overcome.  What do you think – is there algae in your future?

7 thoughts on “The Algae Revolution”