Have you ever had your power knocked out by a storm?  If so, you know that with no electricity, your lifestyle regresses about 100 years into the past.  And if you were out of gas, too, you’d be really stuck.  So I’m not exaggerating when I say that cheap and plentiful power is the lifeblood of our modern civilization!  The problem with power, of course, is that there’s not enough of it, and some people don’t have access to it at all.

I present you here with three of the latest attempts to resolve this problem.  Each uses a different mechanism, and has a different application.  But what they have in common is that they’re incredibly innovative, and they help to produce power where it’s needed most.  Oh, and they all depend on certain impolite bodily excretions.  Here’s how to generate power from…

Incredibly, this pee-powered generator was invented by teenage students half my age.  The 3 Nigerian girls in the video below carry out electrolysis on human urine, then purify the resulting hydrogen.

The Household Bio-Reactor is a novel power source that can use sewage – but it’s equally happy to make use of kitchen waste like potato peels and apple cores. 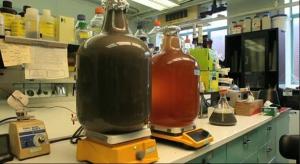 Pretty amazing devices, even if I do get queasy thinking about them.  What do you think of a future powered by waste?  Share this on Twitter or Facebook, then add your thoughts below.