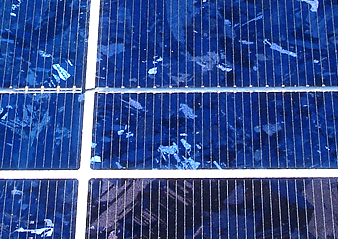 Many secrets lurk beneath the surface of a solar panel (image: sxc.hu)

Solar panels are a double-edged sword. On one hand, they’re a great way to get clean electricity. Unlike fossil fuels, sun power isn’t radically altering our climate, and we won’t be staring down the barrel of a “peak sun” problem for at least another 5 billion years. On the other hand, they are relatively expensive (per watt) compared to other energy sources, and the materials used to make them tend to be rare, toxic, or both. For example:

Gallium Arsenide – A semiconductor compound used to build the solar cell; it’s made out of gallium (rarer than gold) and arsenic (a deadly toxin)

All of which makes this bit of news from Science Daily that much more of a game-changer: Stanford researches have created solar power cells made entirely from carbon.  Carbon, of course, is abundant, cheap, and non-toxic* (and the materials used here are not adding to the atmospheric carbon that causes climate change). The downside, at the moment, is that the cells aren’t very efficient compared to normal photovoltaics. But the technology is very new, and in the future we could very well see a whole industry of carbon solar panels.

*Correction: Carbon’s toxicity is actually highly variable, depending on its form (see the comment below). The Stanford team used nanotubes and sheets of graphene, the former of which may be carcinogenic at some level. The latter’s health effects are disputed. I should have made the weaker assertion that these are nevertheless significantly less toxic than cadmium and arsenic – not non-toxic.

(Sorry if today’s post was a little shorter than usual [and apparently under-researched!], but I’ve been working under deadline for the Urban Times on a piece about suburban sustainability. It’s submitted, and I’ll be excited to share it with you soon – but more importantly, I can turn my attention back to Cosmic Revolutions!)

4 thoughts on “Solar Panels, Minus the Expensive Toxins”