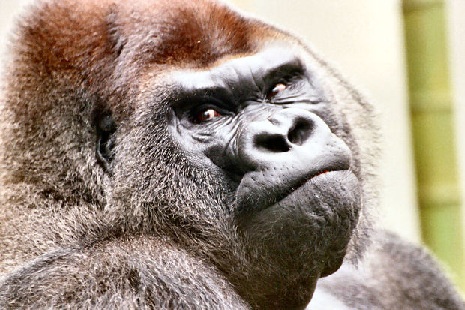 He wants to explain why quantum teleportation theory is internally inconsistent, but we don’t speak gorillaese. Yet.

Ever wanted to text-chat with a bottlenose dolphin?  Or collaborate with a bonobo on a chart-topping blues-rock anthem?  I’m not promising it’ll happen, but… something like it might.  A reader and friend passed along this bizarre and intriguing article from NPR: Peter Gabriel’s Interspecies Internet.

The “interspecies internet” project is actually led by Neil Gershenfeld, a computer scientist at MIT, who wants to “connect dolphins, apes, elephants and other species with one another — and also with us.”  What the heck?  Well, you may already know that some non-human animals can take on cognitive and creative tasks that we usually think of as a purely human domain.

For example, Koko the gorilla famously learned to communicate with humans using sign language, eventually acquiring a vocabulary of over 1,000 words.  And it’s been well-demonstrated that elephants can create abstract art, of a sort, even displaying stylistic differences between artists.

Of course, none of this activity is nearly as sophisticated as it would be if done by a human.  But it’s also quite a bit more sophisticated than any completely non-sentient species could accomplish.  This broad spectrum of ability is intriguing, but poorly understood.

And that’s where the internet part comes in.  Gershenfeld’s hope is that by allowing humans to connect with animals remotely, using specially designed interfaces, we can better discern just how capable these animals are.  In the process, we can also learn a whole lot about intelligence, art, language and even our own consciousness.  It’s also a step forward in learning how to communicate with beings who are not like us – which may be useful in case of any future extraterrestrial contact.  Finally, if nothing else, this project will be a sorely needed interspecies exercise in empathy.

As promised, here’s musician Peter Gabriel jamming with a keyboard-playing bonobo.  For more videos, check out the WBUR article.

One thought on “Peter Gabriel Jams With Bonobo; Facebook for Animals Not Far Behind”