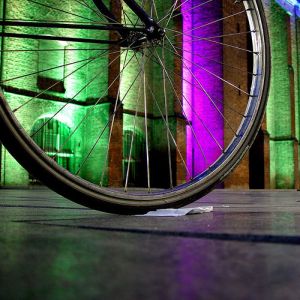 This may come as a surprise, but the future of transportation has been around for two centuries already.  Of course, back when ol’ Baron Karl first put two wheels together and rode them around 1817 Mannheim, he just thought he’d made a kind of a re-usable horse.  He certainly had no idea his invention would come to shape the future of the information age.

Even as recently as my own childhood, I couldn’t have guessed bikes would be ever be such a big deal.  At the time, they only seemed useful to younger teens, as a faster alternative to walking.  For anyone age 16 or over, on the other hand, our car-obsessed society insisted that there was only one respectable ride to have.  And sure enough, I didn’t see any adults riding bikes, outside of the occasional oddball college professor.

But according to current trends, bikes are making the move from kid’s play to serious business.  Over the past 40 years, world bicycle production has grown 300% faster than car production (source).  In Paris alone, over 100,000 people per day take advantage of Vélib, the bicycle sharing service.  Right here in Boston, the Hubway bike system has been up and running for a year now.  And if you’re still not convinced, I did a search on just one week’s worth of recent news, and turned up bike-sharing programs being planned in Montgomery, MD; Vancouver, BC; and Philadelphia, PA.

So what gives?  Why all the sudden love for our two-wheeled friends?  Well, bikes may not have changed much over 200 years, but the rest of the world certainly has.  Now is the perfect time to put bikes at the center of planning and development, and here are 5 reasons why:

1. The world is urbanizing.

As I’ve discussed here and there, the world’s population is moving into cities.  The surge in density will have many ramifications, one of the most annoying of which is increased traffic.  It’s not much of a stretch to picture half the world stuck in an eternal traffic jam.  But imagine, instead, if this newly urbanized populace chooses bicycles.  Since a bike’s profile is many times smaller than a car’s… presto!  Road capacity goes up, and commute time goes down, with only minimal investment in infrastructure.

Whether on the macro level (our dependence on the Middle East) or on the micro level (pain at the pump), paying for gas is no one’s idea of a good time.  After all, that’s about $2,000 last year that you could have spent on something else.  Bicycles, of course, cost virtually nothing to use.

Rising temperatures and wild weather fluctuations will lead to receding coastlines, terrible storms and outbreaks of disease.  But for every bike that gets on the road, a carbon-belching car will be left in the garage.  For example, Hubway, the Boston bike-share I mentioned earlier, has already kept 240,000 lbs of carbon out of the air.

It is literally impossible for there to be an unlimited supply of oil in the world, and that means we’ll eventually run out.  Bikes reduce our dependence on the sweet, sticky black stuff, giving us a cushion as we figure out how to wean ourselves off.  For that matter, even subways, buses and electric vehicles, however efficient, are usually powered by something non-renewable at the end of the day.  But bikes are you-powered.

I don’t know about the rest of the world, but in America today two trends are clearly manifest:  One, we as a nation are becoming more obese over time.  Two, obesity can be pretty bad for you.  It’s likely a side-effect of our transition to an information-based economy – it’s hard to burn calories sitting at a desk.  Or perhaps the scourge of cheap, fake food is finally exacting a toll.  In any case, a populace that’s getting regular exercise just by going to work will surely be healthier – and happier.

So that’s why I think our future should be one full of bicycles.  What do you think – will bikes ever beat cars?  Will it make a difference? And how often do you ride a bike now?  Speak up in the comment box, or ask your friends using the sharing buttons!

6 thoughts on “Bicycles Are the Future of Transportation”