Just came across this bizarre story on Nextnature.net:

Tired of spending time, money and energy on preparing meals, [Rob Rhinehart] decided to find a new way to survive without actual food. He created a unique mixture called “Soylent”, which contains nothing but the elements the body needs: iron, vitamins, fat, calcium and dozens of other nutrients. 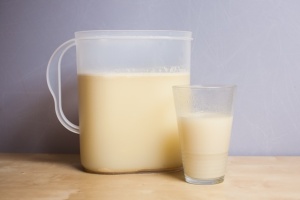 Let’s get the obvious problem out of the way first: he’s named his nutrient fluid after the 1973 dystopic sci-fi movie Soylent Green, in which the eponymous foodstuff turns out to be (spoiler alert) made of people.

Assuming you can get past the poor naming choice, you’re immediately confronted with the equally disgusting color (beige) and consistency (vomit-ish).

There are definitely positives here: no more meal planning, to say nothing of never having to go to the grocery store again.  Plus, you have an unprecedented amount of control over what goes into your body, which makes everything from weight control to allergen avoidance that much easier.  Finally, raw nutrients don’t need as much energy to produce as actual plants and animals.

If all this whets your appetite for more, go check out the guy’s interview with Motherboard here.  To be fair, they do question him about some of the above issues, and he offers a pretty reasonable, evidence-based defense.

Personally, I consider myself a foodie and I’d have a hard time forgoing a delicious home-cooked meal in favor of this weird drink. But for those times I just don’t have the energy to cook and want something healthy… well, maybe a bottle of soylent is just what the doctors ordered.

How about you?  Would you ever try this stuff?  What would you think of a post-food world?

Cosmic Revolutions brews up an intriguing vision of humanity's future, from smartphones to cyborgs. Plug into the latest trends in tech, culture and green living by subscribing below. It's free!
Join 487 other subscribers