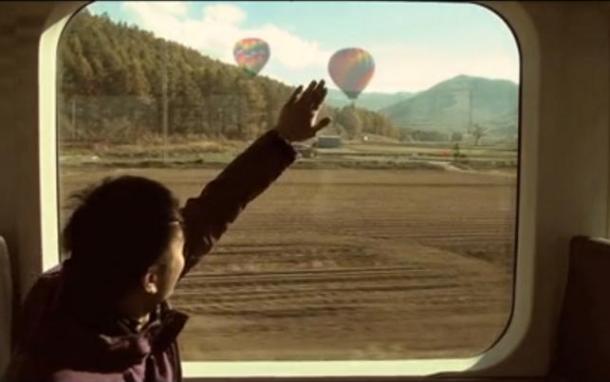 image: still from the video below

Imagine you’re on a long train ride.  Bored, you turn to the landscape rolling past the windows, and decide to dress it up a bit.  You conjure up some flocks of exotic birds to hang in the sky, and a few horses that appear to be running alongside.  Before you know it, you’ve arrived at your destination after having created and animated an entire epic scene taking place out the window.

Is this the power of imagination?  Nope, it’s the future.

The “Touch the Train Window” project, from a Japanese group inexplicably called Salad, is still experimental but basically works as I described.  Augmented reality projects, especially Google Glass, have been making quite a splash lately, including right here on this blog.  But unlike Google Glass, which you have to wear, this type of system would be integrated into the windows of your train.  Or, presumably, into your plane, your car or even your house.

It works through a fascinating combination of existing technologies.  It uses a Kinect to detect your movements, a GPS to track your speed and position, and a projector to display partially transparent images onto the window.  Meanwhile, an iPhone loaded with openFrameworks software handles all the processing.  As you can see from the video, this concept is still in its infancy, but holds great promise.

What Are Augmented Windows Good For?

Lots.  The main thrust of Salad’s project, of course, is a simple diversion to keep the kids entertained.  But the potential of augmented reality windows goes far beyond this; here’s a sampling of the possibilities.

Start thinking of your train window as just another digital screen, and it’s not a big leap to imagine a games marketplace sprouting up around it.  To take full advantage, they’d have to be games that incorporate the real-life background in some way, perhaps a race across the landscape or an “I Spy” sort of thing.  Of course, since the window is essentially a giant touch screen, nothing says you can’t play Angry Birds on it, or other silliness as desired.

Why not link AR windows together, suggests Dvice.com, and allow its users to interact?  Compete on a puzzle game or make some collaborative artwork with the person next to you in the backseat of the car.  Or, for that matter, you could do this with someone else in a completely different car, either someone you know or just whoever happens to be nearby.

Outside of gaming, connecting with other people is also an end in itself.  AR windows could allow a whole new kind of social networking, one where you share not just a digital space, but an actual visual space as well.  For example, an AR window pointing at a construction site could allow architects to collaborate remotely, sketching out all their ideas on the same window.

Finally, the biggest application of AR windows is the same as it is for augmented reality generally: they can plug you into the unseen digital space that is always around us.  Imagine the possibilities for a car windshield, just for starters.  You could display (partially transparent) information about the car, like your speed, compass direction, engine status and much more.  Technical hurdles aside, this would be superior to a conventional dashboard because it would be fully customizable.  You could rearrange the components, hide the ones you don’t want, or even program the display to change in response to particular conditions.  Slam on the brakes, say, and the visuals would disappear to give you an unobstructed view.  Or have it display the weather and sports scores every time you put it into park.

Assuming the car’s connected to the ‘net, you could also show geo-spatially relevant information from the outside world. You could see a list of upcoming rest stops, starred reviews for the restaurant you’re approaching, or the average number of speeding tickets issued in the area.

What I would be most excited about is an AR windshield that gives me driving directions.  No guessing which “left” the robotic-sounding GPS lady wants me to take – instead, I get a big fat arrow that appears to be painted right onto the road.  Like traffic markings, but personalized just for me.

What Would You Do?

Would you ever want to encounter AR windows on your train or in your car?  What would you use them for?  Speak up in the comments, and don’t forget to share this post and ask your friends too.